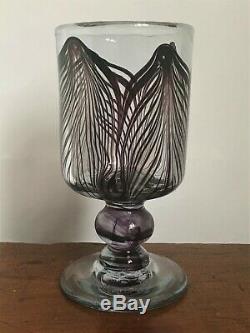 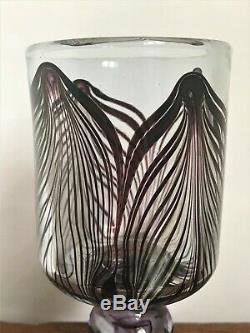 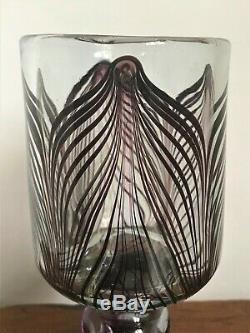 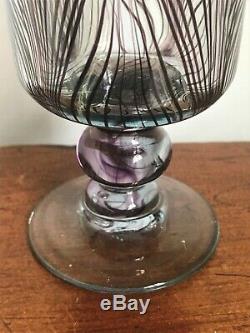 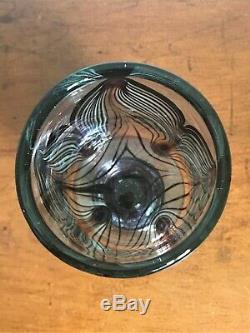 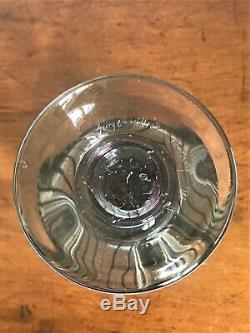 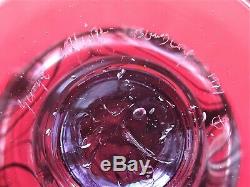 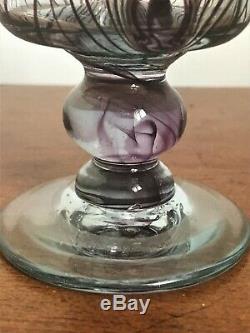 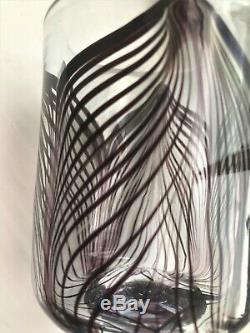 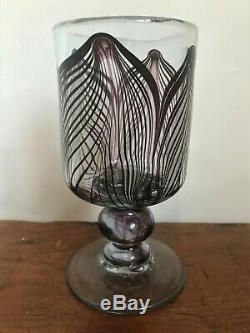 Vintage George Elliott Studio Glass Goblet. Signed & Dated 1977 - Very Collectable! This is nice quality hand blown art studio glass goblet made by the highly collectable glass blower, George Elliott (1933 - 1998) of Bewdley. The glass takes the form of a fairly standard goblet shape and is very thickly blown to the main body the rim is around 3/4cm thick! The glass sits on a knopped stem with a wide foot to the bottom. Around the circumference of the glass Elliott has added swirling trails of purple brown glass that appears to be encased within the clear glass body. The underside of the foot has broken pontil mark which is very slightly rough to the touch. The underside of the foot is also fully signed with the makers details and reads. George Elliott - Bewdley - 1977 - and an anchor symbol. There's lots of information online about George and his work plus there are details about previous sales of his work. George Elliott was a student at Stourbridge in the 1950s. After his National Service in the Navy he won a scholarship to the Royal College of Art and travelled on a bursary to Scandinavia. On graduation he joined Stevens and Williams as a designer, moving to Stourbridge College as a tutor in the early 1960s. There was still a strict demarcation between design and glassmaking, and George did not start to make his own glass until the small furnaces, developed by Harvey Littleton and Dominic Labino in Wisconsin were brought to Britain by San Herman. George soon transferred his energies to mastering the craft of freeblown glass, working on his own without the benefit of the traditional team.

He also worked as a designer for Holmegaards Glassveark in Denmark and for Hadelands Glassveark in Norway. This meant that he had to develop unique ways of carrying out procedures, like casting on a foot to a wine glass. George's forms were, like him, honest, unpretentious, and quintessentially English. He, unlike many others, chose to devote his creative energies on the production of decorative domestic items, working at his studio in Bewdley, and after leaving teaching in the mid eighties, at his 15th century timber frame cottage in Herefordshire. Although his formal repertoire was, on the face of it, traditional, he imbued his forms, whether vases, goblets or bottles with distinctive character, both in shape and decoration.

He specialised in applied, linear decoration which was hooked into festoons round the forms, and added'splashed' applications of coloured shards onto clear and coloured backgrounds. His choice of the traditional was expressive of George as a person; he was, for example an expert with the English Long Bow, which he would make from scratch.

His exact copies of Medieval glasses were much in demand from collectors and Museums. The glass measures 14.2cm in height and is 7cm wide across the mouth - the foot measures 7.5cm across - the total unpacked weight is 396.5g.

The condition of the item all round is excellent and there are no faults to report - the item is free from chips, cracks, scratches or any other damage. Please study the images provided to satisfy yourself as to the condition of the item - if you have any further questions please ask and I'll be happy to oblige. This is very collectable glass maker and this item would make a fine addition to a collection!

The item "Vintage George Elliott Studio Glass Goblet Signed & Dated 1977" is in sale since Tuesday, May 28, 2019. This item is in the category "Pottery, Porcelain & Glass\Glass\Art Glass\British\Other British Art Glass". The seller is "century-antiques-uk" and is located in Wigston. This item can be shipped worldwide.